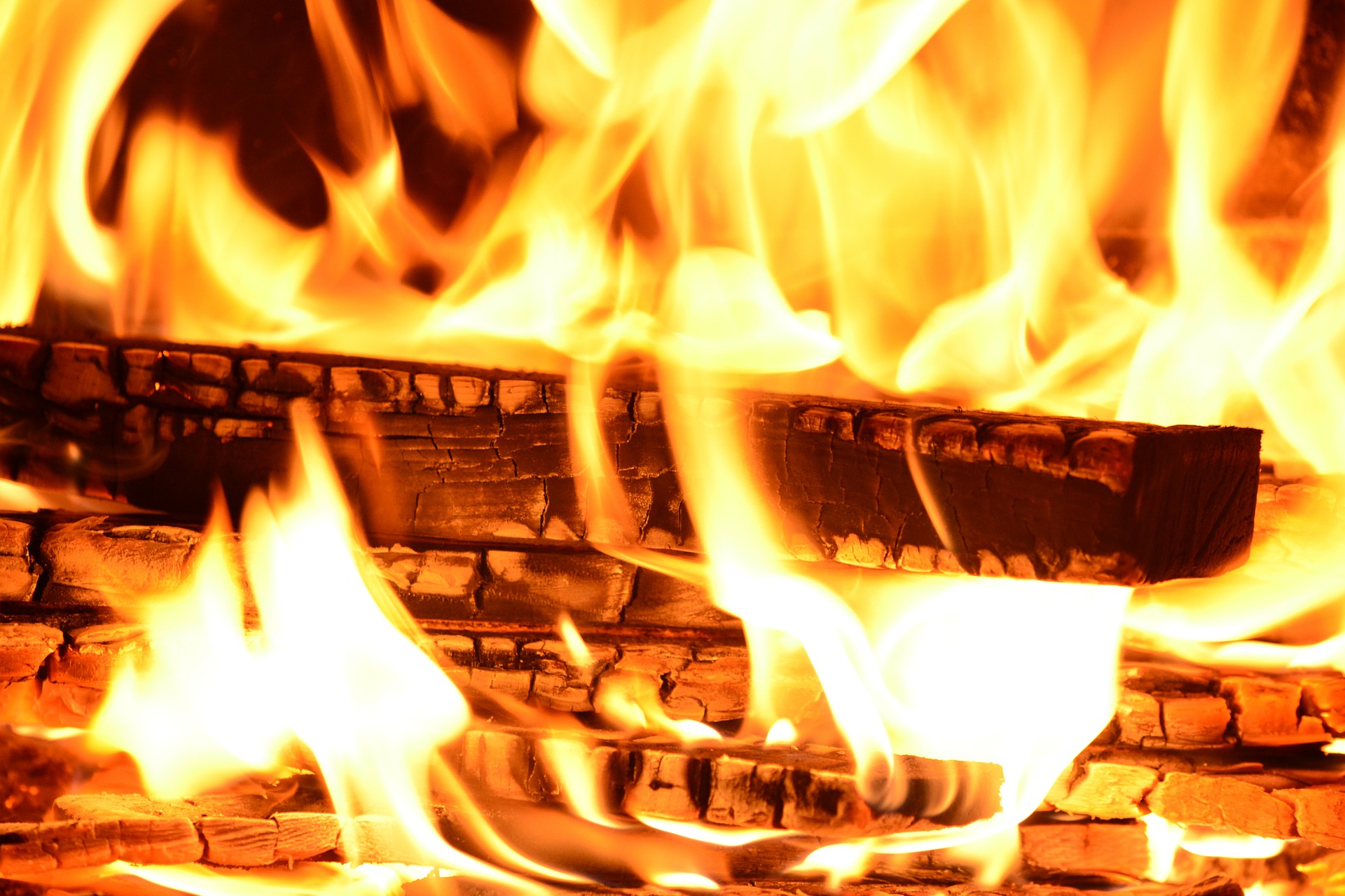 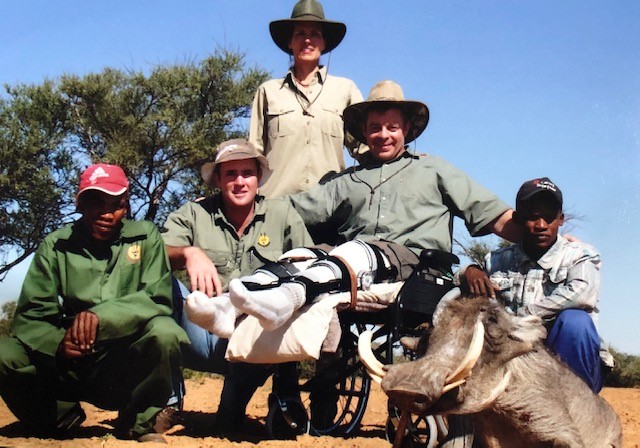 My first day as a professional hunter – By Yvan Nieuwoudt

I was a young 21 year old boy about to set foot in the professional hunting world.

I was assigned to take a couple from Houston, Texas on their first African Safari. I thought to myself that this is their first hunt, and so is it mine. At least they don’t know anything, and neither do I. We’ll have a wonderful safari! I mean, what could possibly go wrong?!?

Brian and Denise seemed like the nicest and kindest people in the whole world (and they are). We really hit it off around the campfire that first night just after their arrival to camp. I went to bed that night thinking how lucky I was to have these easy going people as my first clients. I literally laid awake all night from excitement and anticipation!! I couldn’t wait to start living my dream of being a professional hunter in Africa!

Well, the first morning started off as any other first morning on Safari. We had a light breakfast, a cup off coffee, and a few rounds at the range just to make sure all rifles are still zero’d after a long bumpy flight. 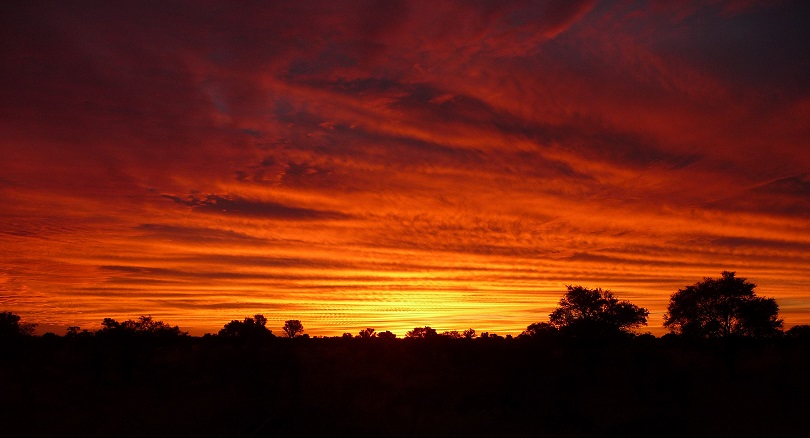 I’ve never had a Land Cruiser hunting rig better prepared for a hunt like I did that first morning. Locked and loaded, we were off looking for anything in the bush that felt like catching a free ride to the States. We had a pretty open list, and we had 14 days to complete it!

The very first animal we spotted was a monster impala ram that ran a little ways into the acacia scrub, and we all decided to make a quick stalk to see if we could get Denise up for a shot at the beast!

On our way while tracking the impala, the most bizarre thing happened. Not only did we see this huge python, but Brian wanted to catch it.

I’ll never forget his exact words! He said, “Man, I’ve never seen one of them snakes in the wild! I got one as a pet back home. I’m gonna catch it!!” Now first, Brian was a bodybuilder at the time, and I was a skinny little punk. I wasn’t planning on arguing with the man, but I did know that this was not a good thing. I honestly didn’t think it was.

Brian went running one way chasing the snake and off the impala goes the other way trying to get away from all this nonsense. (Screw the impala right… he’s probably still running)! Brian is faster than the snake, but the snake is trying his best to climb into a tree. Brian managed to grab a hold of the snake’s tail and then the tug of war started. Being a bodybuilder, all I saw was Brian slowly winning the battle and gaining on the snake’s tail. Now this means that Brian is slowly getting closer to the snake’s head so he can grab it behind the head and have full control of the snake. As he was about half way there, the snake took a strike at Brian just barely missing him. At that same time, the snake also pooped all over him which is a python’s defense mechanism. This caused Brian to jump backwards and ,unfortunately, right behind him was an ant eater’s hole. Brian landed with his left leg right in the hole, over extended it and fell backwards. We all heard a load pop. We could all see the excruciating pain in Brian’s face. This is not good I thought to myself. Brian’s leg is bent the wrong way around. He can now see the “Courtney Logo” under his shoe without taking it off. Now, I’m no medical doctor, but I knew that a leg is not supposed to do that. The first thing I did was pull his leg back to its normal position. I thought the big man was going to ring my neck but soon afterwards he said, “Thanks young man, that feels much better!”

Now, what the heck do we do now! We are 250 km’s from the closest town/hospital. We are 50 km’s away from the nearest cell coverage! I need to get him to a doctor ASAP! My tracker and I picked Brian up. Denise helped as well. We stuck him on the passenger seat of the cruiser and carefully placed the problem leg in the cab. Brian asked if he could close the door himself. I said, “Sure sir, I don’t blame you.” He was in a lot of pain but kept his cool better than I would have! I ran around and jumped in behind the steering wheel, fired the truck up, and then all of a sudden, the most horrible smell I’ve ever smelled hit my two nostrils and made me sick at my stomach right away. So bad that I could not drive the truck! It was that python’s poop! Horrible stuff that is!!!

I got my tracker “Jantjies” to come drive for me. Now we need to get to some sort of cell reception ASAP. I need to get a hold of a doctor and let my boss at that time know what happened. He’s catching a tan 1600 km’s away in Mosselbay and wouldn’t be of much help, but I still thought I’d best let him know.

Denise and I are riding on the back like two tourists. Jantjies is driving (without a drivers license) a critical patient to the nearest calling spot. Forty-five minutes later, here we are, and I’m standing tall on the roof of the truck trying to get a hold of a doctor that was on a ranch nearby. No service yet… we need to go a little further. Finally, I made a connection and luckily Doctor Rex answered the phone. I explained the whole story to him. He explained to me the location of his ranch and recommended we bring Brian in right away!!

We finally got there after another hours drive, and Doc Rex gave that leg one look and said, “He’ll need to get operated on today.” Now I know that there aren’t any such services in this part of our country so I had to ask, “Where the heck will this have to happen and by who??” You can imagine the look on the two Texan’s faces when they heard that!

Doc Rex did great to calm everybody down and informed us that he has a small Cessna 4 seater airplane that he’ll use to fly Brian and Denise to Bloemfontein where he’ll arrange with a surgeon to meet them there! He reckoned this was one of the best Orthopedist in South Africa. (which he was we found out)

This all sounded great to me. This would be the best and quickest way to get Brian to a good hospital where I knew he’d be taken great care of.

Just as we were busy pushing the airplane out of the hanger on to the dirt runway, Brain was standing to the side. He stuck his crutch into a meerkat hole… down went the big man again! This time, it was THE OTHER LEG!!! We all left the Cessna airplane and ran over to Brian. He was now unconscious from the pain, I’m guessing! Right away, Doctor Rex and I both grabbed for the right leg that was now twisted the wrong way around. We straightened it out as we both knew that this leg was not supposed to do that!! I have never seen a big man in such pain before, and I felt so sorry for him. Now with Brian being a body builder and with me being 6’5’’ weighing in at 280 pounds there was no room for my tall self in the airplane so I just had to stay behind and wait. We got legless Brian and his lovely wife Denise loaded and buckled up! Doc Rex informed me before they took off that I must be back here at the airstrip again at 11 a.m. tomorrow morning….and so they take off!

I’m busy driving back to the hunting camp where all their gear and guns were. I stopped for a second next to the road just to come to my senses. What in the world just happened! This was another night that I couldn’t sleep. It’s now two in a row, one from excitement, and the other from worrying where I’m going to find another job… and is Brian going to be ok?

The next morning at 11 a.m., I was at the airstrip as I was instructed to be with all the Texans suitcases and rifles! Now what? There’s nobody home and no airplane in sight! Just as I kicked the dust, I heard the noise of an airplane approaching… Here comes Doc Rex. He made a perfect landing as he was approaching me on the opposite side of the runway. I was dying of curiosity by this time! I want to know how they are doing, how the operation was, and how long would he be in the hospital for!!

To my surprise, as the aircraft approached me, I saw 3 heads through the window. I couldn’t believe my eyes when I saw Brian and Denise smiling and waiving on their way past me!

Brian had both of his legs operated on. They were bandaged up and straightened out in front of him. They had a wheelchair with a board that supported his legs. The big man was smiling again! I could not believe, less than 24 hours ago, I had this man here with two fresh broken legs and here he is saying to me, “Howdy Yvan! Lets go back to camp!” I could not believe my ears and I said “Brian are you sure about that?” He said, “Yea man, I’m not going to hunt today if that’s ok with you but from tomorrow onward we still have 13 days!!” I have never met a braver man than that big old Texan. Till this day, I’ve got the world of respect for them both! 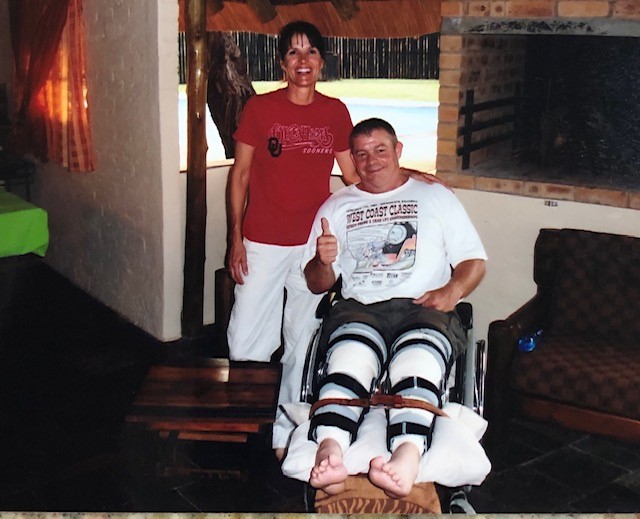 We ended up having a wonderful safari. We managed to get all of the species that were on the list including a big male lion! 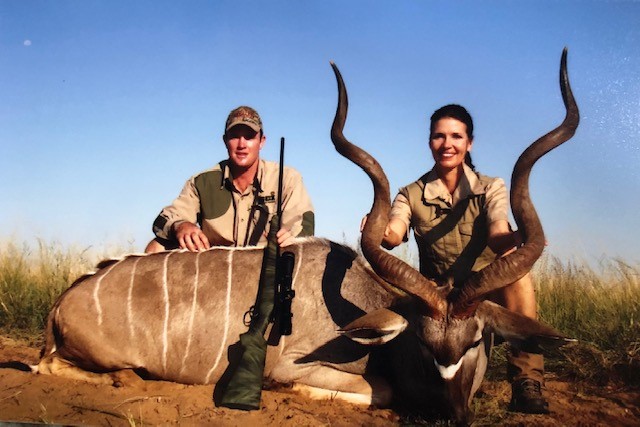 Brian and Denise became dear friends of mine on that hunt, and our friendship ha grown even stronger as the years have gone by!

Africa crawled into their hearts, and they’ve been back on numerous safaris and hunts world wide! 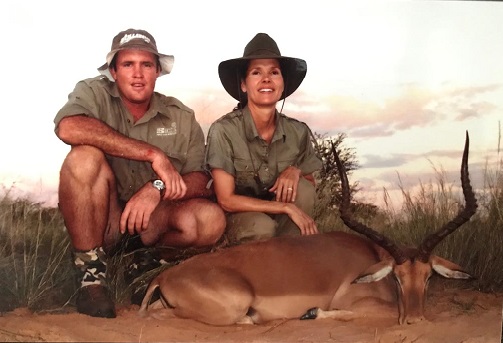 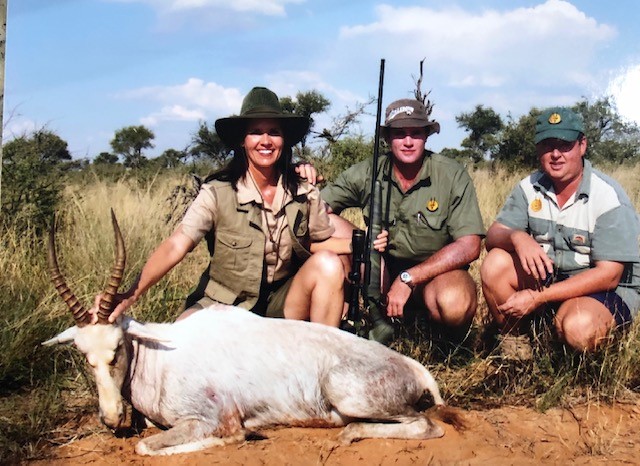 One thing is for sure, a horrible incident like this has motivated this wonderful couple to become world renowned hunters! The hunting world as we know it would not have been the same if it was not for these unique individuals that represent the ultimate embodiment of the hunter-conservationist philosophy and contribute generously to conservation, education, and humanitarian services efforts in both time and financial resources.

They are the recipients of the Beretta & SCIF Award in 2020!

Denise was the recipient of the SCI Diana award in 2017!

My first safari was one to remember! That’s for sure!

It was all down hill from there!! I was and still am blessed to have a wonderful career that has showed me the world and introduced me to magnificent people from all 7 continents of the world including my beautiful soon-to-be wife!!

6
Around The World, Magic Places, News, Travel Guide
Prev Next